Construction of an Oud for a Special Exhibition


In March 2015, I was commissioned by Cat Auburn to construct an Oud for an exhibition taking place in June in the Sarjeant Gallery in Whanganui, New Zealand.  The exhibition, titled The Horses Stayed Behind, would commemorate the 10,000 horses that were sent from New Zealand to the Middle East to serve the allied armies in the first world war.  Of this number, only 4 horses ever returned.  The artist, Cat Auburn, plaited 500 different horsehair rosettes to make a mural depicting this story. Many different colours of horsehair, donated from all over New Zealand, went into this stunning creation.

My brief was to construct an Oud, an Arabic precursor of the lute, using horsehair and which would be played at the opening of the exhibition.  This was a very unusual request, as you might imagine, but seemed to fit the theme of an Antipodean/Arabic fusion and I was up for a challenge.  It is important to me that all the instruments I make sound good and are enjoyable to play so I would not simply be making an artwork but an instrument I had no experiencing of making in a very short timespan.  I knew that complex wooden joinery goes into making the curved bowl back of a traditional instrument and, as I had such a short time available to deliver it, I decided to rather employ my standard method for constructing resonator instruments. This would involve making a fibreglass mould in which to make a fibreglass bowl for the Oud body and I would then apply various colours of horsehair to the surface to imitate the vaulted back of a traditional instrument. 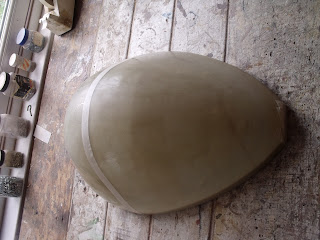 Here is the shell of the Oud fresh from it's mould and awaiting the application of stripes of horsehair. 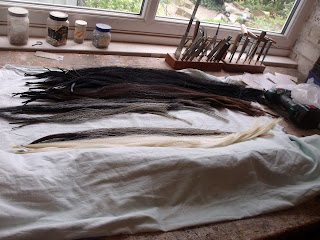 The assortment of washed and combed horsehair donated by people from all over NZ and sent to me by Cat. 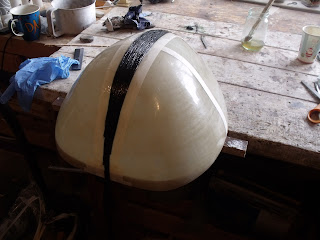 Above and below, the hair being applied. It was stuck on to the shell using polyester resin, the same material that the shell is made of.  It holds the hairs in place and has good adhesion to the resin surface. 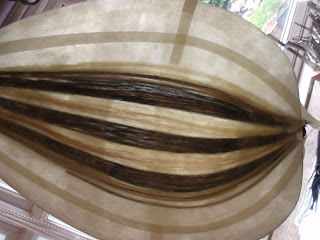 After some time and much sticky mess, the back of the instrument looked like this - below 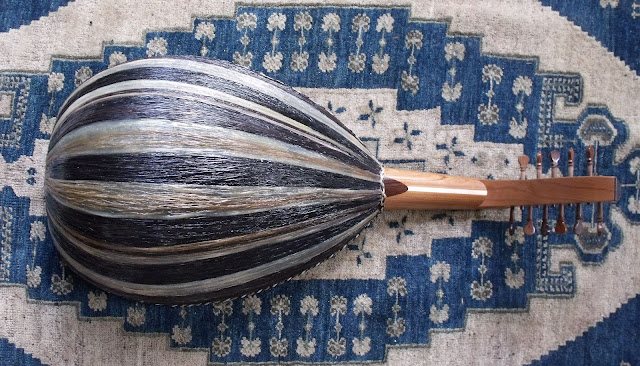 The top of the instrument was to be constructed of Kauri, a type of soft pine native to New Zealand.  I chose this as I thought it added to the cross-cultural idea of the commission - old and new materials, eastern and western influences.
I used a pattern of bracing I found on the internet and made the top as thin as possible.  I have made ukuleles and mandolins using this combination of wood top and resin back and sides in the past with good success so I was certain that if I could build the top light and flexible enough, the tone and volume of the instrument would be good. 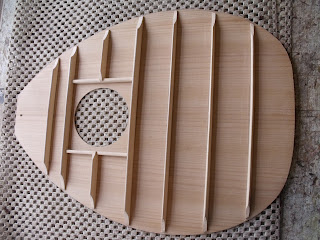 The neck and pegbox were constructed in American cherry with a maple centre strip. This strip extends into the pegbox and is vital for holding the whole assemblage together. The tenon on the right is half of the body neck joint.   Dimensions for the neck were largely a guess and probaby ended up being wider than they should have been. 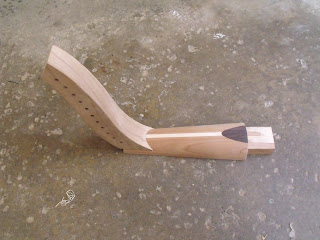 The photo below shows the shell with the hair applied sitting in the original mould while having its end blocks and linings glued in place. The mould was very handy for holding the egg shaped body in place while it was being worked on. The linings are a type of laminating foam that holds glue very well and gives an easy to bend extra gluing surface for the top to body joint. 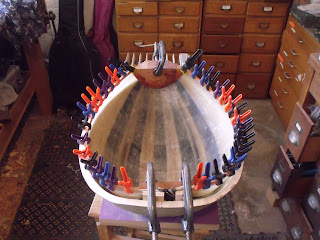 Below - the top being glued to the body using a traditional tape method but also modern slow setting epoxy glue to give me time to get everything in the right position. The neck was already in place without the pegbox. The clamps held the neck to the workbench while I wrapped the tape around the body. 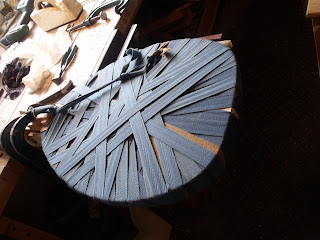 Below - this is the body sitting in its mould with pegbox and fingerboard attached and waiting for the next step - the addition of bridge and braided edging and setup.  I sprayed the top, neck and pegbox with varnish at this stage. The back only needed a final coating of resin and picking out of loose hairs and it would be finished. The pegs came from Pakistan and are made from a type of teak.  Luckily, they came with their own tapered reamer to make fitting them easy. 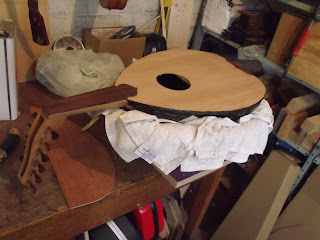 Below is the finished body with braided horsehair edging and a woven horsehair rosette in the soundhole both of which were supplied by Cat Auburn, the commissioning artist. 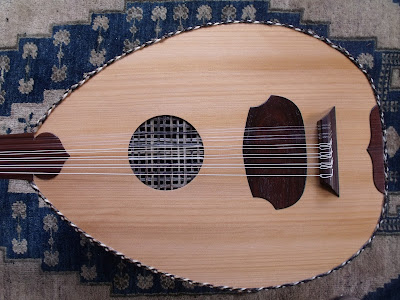 So, for anybody needing a simple way of building an Oud, I can supply polyester resin bowls from this mould.

﻿
﻿
Above - the completed instrument ready to ship to New Zealand in time for the exhibition opening.
Shortly after shipping it off, I had the good fortune of seeing the Oud trio, the Joubain Brothers, play in Leeds. Their beautiful, traditionally made instruments sounded wonderful and I was pleased to find that my non-traditional instrument held up very well in comparison for volume and tone.
The Horses Stayed Behind by Cat Auburn can be viewed at The Sarjeant Gallery, Whanganui,
New Zealand until 10 January 2016.﻿

Steve Evans
I have been chief maker of Beltona Resonator Instruments for the past 22 years. Before this I spent most of my working life repairing musical Instruments both in New Zealand and the UK.